Garden Sculpture (Model for Meridian), Bronze, 1958 in the Pavilion room. Barbara Hepworth: Sculpture for a Modern World opens at Tate Britain - the first London museum retrospective or five decades of the work of Hepworth (1903-75), one of Britain’s greatest artists. This major retrospective opens on 24 June 2015 and will emphasise Hepworth’s prominence in the international art world. It highlights the different contexts and spaces in which Hepworth presented her work, from the studio to the landscape. Highlights include: A room dedicated to a series of sculptures Hepworth carved in the 1940s, which are characterised by the dramatic hollowing out of pieces of wood and the painting of the interior spaces she opened up. Works in this room include the famous Pelagos 1946 (‘sea’ in Greek), which was inspired by a view of the bay of St Ives, Cornwall; Imposing wooden sculptures made from huge logs of the sumptuous tropical hardwood guarea, such as Corinthos 1954-5 – a grand 1 metre x 1 metre sculpture named after the ancient Greek city in which Hepworth summed up the light and landscape of Greece. The unusually large size of guarea pieces allowed Hepworth to experiment with interior spaces through the use of string, spiralling edges, paint or rough carved surfaces to maximise the effect of light; An architectural installation inspired by the Rietveld Pavilion, originally built at the Kröller-Müller Museum, Otterlo in 1965 which housed a display of Hepworth bronzes at its opening. The structure in the exhibition explores how Hepworth presented her works and how she worked on an international stage. Barbara Hepworth: Sculpture for a Modern World is at Tate Britain from 24 June to 25 October 2015. 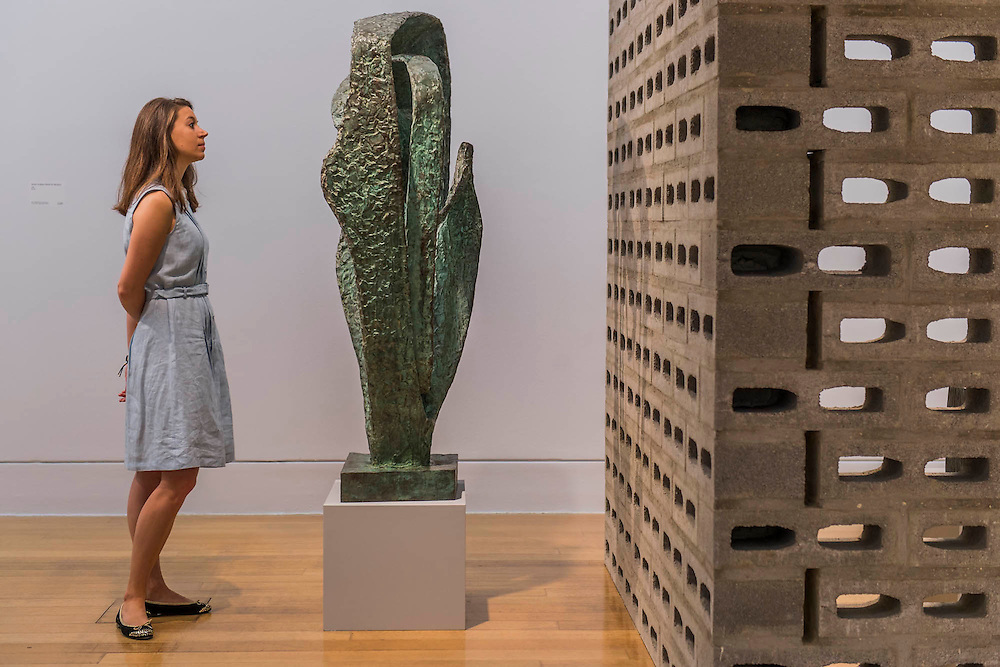